Hobbies
love to restore old houses and have plastered and painted, laid
tiles and bricks, designed landscape gardens, and learned the
hard way to measure twice, cut once.

Advice to others
Breath. Laugh. Love.
Express yourself honesty no matter how dark the truth. 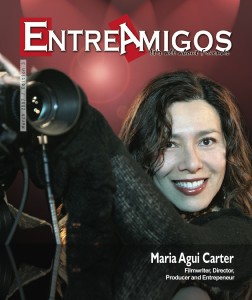 EA: What do you want others to
know about you?
MA: I came to the US as the child
of an illegal immigrant and lived underground
for most of my childhood.
That experience has helped shape
my understanding of my American
citizenship as a privilege and I am
compelled by this responsibility to
speak truth to power with my films.
EA: How did you get started as a
filmmaker?
MA: I had a mentor named Robert
Gardner, an anthropological filmmaker
who found the common bonds
of humanity no matter how different
the customs of the groups he filmed,
and whose films were visual poetry.
He recommended me for a year
of studying film and anthropology
around the world that he was leading.
By the end of the year, I was
hooked. From there, I volunteered
at various film companies, then got a
job at WGBH, Boston.
EA: What movie/documentary did
you produce or are you most excited
about?
MA: Every time I make a documentary
I enter so deeply into a story or
issue that I become totally entranced
by it, and most of my films have
been made for Public Television. My
current film REBEL is the one I’m
most excited about, because it is my
first independent film. I had better
be excited, because it’s taken me
five years!
EA: Which was the most difficult?
MA: REBEL is my most ambitious
film. I have made many documentaries,
but REBEL is a documentary
with dramatic sequences, and also
a period film, recreating the world of
19th century Cuba, New Orleans,
and the Civil War. I have also raised
the financing myself, and because it
involves actors and locations, as well
as because it’s shot using the latest
high definition technology, it’s an
expensive film.
EA: Why REBEL?
MA: Latino children are the largest
minority in our nation’s schools, have
the highest drop out rate and are
under-represented in higher education.
Textbooks include few Latino role models,
and school curriculums seldom
mention the accomplishments of 500
years of Hispanic presence in America.
REBEL, a film about a Cuban woman
from New Orleans who fought in the
American Civil War, is the first of a series
of biographies about Latinos who
have contributed to culture, politics,
and art that I am working on called the
Heroes (accent on the first “e”) series.
EA: What is your work style?
MA: I am endlessly fascinated by my
work, and the aesthetic challenges of
trying to convey ideas in a temporal,
storytelling medium. I work whenever
I can, whether that means starting the
second part of my workday after the
kids have gone to bed, or bringing my
scripts to a Vermont vacation.
EA: What do you do for fun?
MA: I spend time with my family and
my wonderful friends as often as possible.
I watch a lot of movies and read
a lot of books. I take long walks in the
park with my dog Luna.
EA: Where did you go to school?
MA: I went to a boarding high school
in Concord New Hampshire named St.
Paul’s School, and to Harvard University,
both on scholarship.
EA: Do you have children?
MA: Yes, Max is my marvelous,
compassionate, very social and boundlessly
energetic 13 year old. Isabel is
my athletic, precocious 12 year old
who writes poetry, and dreams of what
the world could be.
EA: How do you create a balance in
your life?
MA: One of my favorite poems is by
Edna St. Vincent Millay, “My candle
burns at both ends; It will not last the
night; But ah, my foes, and oh, my
friends– It gives a lovely light!”