“Agui Carter found powerful themes in those accounts that speak to her experience as a Latina storyteller, immigrant to the U.S. and feminist.”

Filmmaker explores a Latina whose story defies all conventions

Award-winning filmmaker Maria Agui Carter has much to say about her new film Rebel, the story of a Latina who posed as a man to fight and spy in the American Civil War. Agui Carter will discuss the film, which recently aired as a PBS special, and its protagonist, Cuban immigrant Loreta Velazquez, following a 7 p.m. screening on September 25 at El Museo Latino, 4701 South 25th Street.

An immigrant herself, Agui Carter is an independent filmmaker based in Mass. and founder of Iguana Films, a film and new media company making Spanish and English language works. She’s a graduate of Harvard University, where she’s been a visiting artist-scholar.

In a director’s statement and answers provided via email, she details what led her to do the 12-years-in-the-making project.

“I’m a history buff, I look for interesting characters, especially women and Latinos, in American history,” she says. “I came across an original copy of Loreta’s 1876 memoir in Widener Library (Harvard).”

Agui Carter found powerful themes in those accounts that speak to her experience as a Latina storyteller, immigrant to the U.S. and feminist.

“I identify with Loreta and sympathize with her painful struggle to find acceptance within her community. Loreta presents a Latina’s and a woman’s perspective on a time period and a war we usually think of as exclusively black and white. But this is less a story about the Civil War and more the story of a complex woman who reinvented herself to survive the impossible circumstances in which she found herself. And that reinvention of self is a quintessentially American experience that resonates with so many Americans – that idea we are not what we are born, but what we make of ourselves.”

Agui Carter’s fllm answers and asks questions prompted by the memoir. “My film is a detective story trying to understand the woman, the myth and the politics of how we understand our own past.”

From the time Loreta published her memoir until now, her story’s been marginalized and contested, even called a hoax.

“She was attacked as a liar and a fraud by an unreconstructed Ex-Confederate general. Jubal Early, who read her memoir and thought her story preposterous. He was quite powerful and publicly dismissed her story. Subsequent generations generally followed his lead.”

To unravel the mystery, Agui Carter consulted historians, who informed her some 1,000 women disguised as men fought in the Civil War. They confirm Loreta fought under the name Harry T. Buford at First Bull Run and was wounded at Shiloh. At some point Loreta became a spy, first for the Confederacy, then for the Union. She went by many aliases, including Laura Williams and Loretea DeCaulp. Agui Carter’s hybrid documentary uses actors to dramatize certain scenes.

“We don’t know all the exact details of her service, nor that of the other documented women who fought disguised as men because they were hiding their tracks and identities,” she says.

As for why Loreta did what she did, Agui Carter says, “She had just lost her family and as a young girl she had dreamed of being a hero. it’s a complicated and deliciously twisted plot. ”

The filmmaker admires what Loreta did in carving out an unexpected, emancipated life and sharing her journey with the world.

“Her book popularized her story of a woman who broke the rules and social boundaries that, post-war, so many were trying to reconstruct.  By writing her memoirs, she allowed others to imagine that they, too, might choose their own fates and go against the grain. This was considered dangerous at a time when men were returning from war and expecting the women to go back to their old roles.

“She refused to be bounded by the strictures of her time. She imagined a world for herself and went out and created it, regardless of what people told her she couldn’t do. She made the impossible possible for herself.”

Agui Carter has authored a new play, 14 Freight Trains, about the first American soldier to die in Iraq – an undocumented Latino. It has reverberations with Rebel and her own family’s experience.

“My mother married a Vietnam veteran who applied for citizenship for my mother and myself. War is a terrible, painful, transformative thing and yet people believe in this country enough to put their lives on the line for it, including generation after generation of immigrants. This is a profound experience and I am drawn to these stories of people who would believe in something so much they would risk their lives for it.”

For more about the film and Loreta’s story, visit http://rebeldocumentary.com. 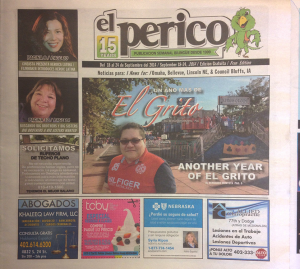 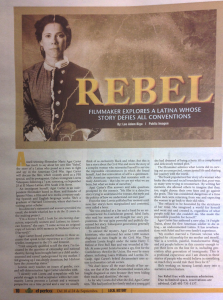