Velazquez went by Harry T. Buford. But she soon realized war had little glamour or honor 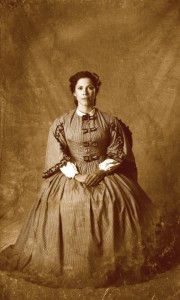 Loreta Velazquez dressed as a man and went by Harry T. Buford, a soldier in the Confederate Army and later a spy for the Union in the Civil War. She’s portrayed by Romi Dias in the PBS program “Rebel.”

“Rebel” starts out interesting and gets even better. Better, that is, as drama. As a story of American and human history, it gets more depressing. Coming from the Latino PBS series “Voces,” “Rebel” tells the story of Loreta Velazquez, a woman of Cuban ancestry who served as a Confederate soldier and later a Union spy in the Civil War.

She joined the Confederate Army early in the war, following the deaths of her husband William and their three young children.

Like hundreds of other women, she cut her hair, took a man’s name and then was careful not to remove her baggy uniform in front of her fellow troops.

As “Harry T. Buford,” she was wounded several times and soon came to realize war had no glamour and little honor.

Exactly why she slipped over to the Union side, we don’t know. We do know that 10 years after the war, she wrote a book about her experience.

The book portrayed male soldiers as brutish and war as futile and inhuman. Confederate Gen. Jubal Early, who wanted the rebellion remembered in history as a grand and noble endeavor, made it his mission to discredit Velazquez.

Since his view was far easier for the South to embrace, he was able to do so, and her story was largely buried for the next century.

We know little else of Loreta Velazquez. We’re not sure when she was born and died, or her husband’s last name. The only picture we have may not be her.

But her message can’t be stilled, nor her courage. “Rebel” restores some of the story Gen. Early worked so hard to erase.