“… she was a woman way ahead of her time. .. Loreta’s story is an intriguing yet complicated one about US-Cuban history, race and sexuality.” 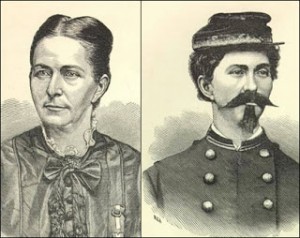 Her name was Loreta Janeta Velazquez and she was a woman way ahead of her time. During the Civil War, she donned a beard and mustache, got her hands on a male uniform and fought as Lt. Harry Buford for the Confederate Army. Yes, she was a cross-dressing Latina soldier but most of all, she was una Cubana, from Havana! Loreta’s story is an intriguing yet complicated one about US-Cuban history, race and sexuality. This lady definitely had balls!

I wrote a story in today’s Globe about a Boston filmmaker who is producing a documentary on Loreta and her life in the Civil War. The filmmaker, Maria Agui Carter, spent two years documenting and researching Loreta’s life in New Orleans where she lived as a young woman and learned English and French after leaving Cuba where she spoke Spanish. Carter wanted to produce her film, titled REBEL, because she feels that other Hispanics should know about some of their own heroes in American History.

It’s a fascinating story because Loreta also wrote a 600-page memoir detailing her life on the battlefield as Harry Buford. The book is called The Woman In Battle, The Civil War Narrative of Loreta Janeta Velazquez, Cuban Woman and Confederate Soldier. I have a copy of the book and have been reading it. What a Cuban rebel belle!

To read my article on Loreta, go here or to watch a trailer of the documentary, which comes out this Spring on PBS, go here. The actress playing Loreta is Romi Dias, whom I met last week at the Orchard House in Concord for the reenactment scenes.